With no family or friends, Momoga finds his escape through online gaming. When the role-playing game he’s spent 12 years in finally shuts down for good, he wants to stay logged on until the last second. Momoga falls asleep as he waits for the game to go offline, but when he wakes again he finds himself trapped in the fantasy world as his avatar — a powerful skeleton wizard in an uncertain and potentially hostile world.

Yes, it’s that plot again. If .hack, Sword Art Online, Accel World, and Log Horizon haven’t sated your need to see this story played out, Overlord is here to do it worse. The show has a considerable runway time as Momoga wanders around in his guild hall introspecting and essentially moping while ambient music plays and nothing pertinent happens. Once he lays his eye sockets on the A.I. character Albedo, he knows what he has to do. Momoga uses his sweet guild master powers to rewrite Albedo’s coding so instead of being a royal bitch (his word, not ours) she’s madly in love with him.

And no one would blame him even if they were around to do so.

Naturally, this is possible since not-Skeletor has the Staff of Deus Ex Machina, imbuing him with godly powers. For instance, he can somehow smell Albedo despite having no sense organs. Her sweet scent queues him in on the fact that his video game world might be real because that’s the first conclusion any rational person would jump to. The only logical follow-up to the sniff test is seeing if Albedo will let Momoga fondle her demon tatas.

Having your boobaru impaled with spiked bones must feel fantastic.

Who knows how Momoga can even feel anything, but Albedo instantly creams herself and asks Momoga to have sex with her on the spot. Since this is fiction, Momoga immediately feels remorseful about changing his friend’s coding of Albedo instead of tearing off his robes like he’s Hulk Hogan. Some of you thought we were going to make a joke about boning but we’re way too sophisticated for that, right?

That’s more than anyone needed to know about the “plot.” This guy has allegedly been playing this MMO game for 12 years, but he can’t seem to remember any of the game’s commands except how to make an NPC want to diddle. Depite being the guild master of a fantastically successful guild, he doesn’t know the names of any of the guild hall servants. He can’t even remember his own butler, Sebas Tien. Sebastien. Yeah. Momoga is also amazed when the computer characters come to life — not because they’re instantly sentient — but because their mouths move when they talk. It’s the year 2126 and video games apparently haven’t bothered to L.A. Noire any character animation in the next hundred years.

Then there are these little bastards to round out a cast of characters whose mouths you wish would stop moving again.

Momoga manages to remember his entire retinue of battle maids and how to cast spells, though. If you were expecting anything flashy, there’s more disappointment in store. No crackling lightning, no sharknados, just sword slashes and flashes of light. It’s difficult not to feel that the only reason Momoga is a skeleton is so no animation had to be done to make him talk or give him facial expressions. The episode also sported choppy animation across slow panning shots of still scenes. That’s the one place where cutting corners to save money should really be smooth, but the frames are so stilted that we checked a raw second copy to make sure it wasn’t an encoding issue with the file itself.

In case you were still holding out any misguided hopes that this wouldn’t be the most milksauce pseudo-harem of all time.

Overlord gets lazy in its recycling of shots only seconds apart. We’re not talking generic flashback scenes, either. It actually uses the exact same panning shots multiple times in the same scenes. Putting the horrible animation practices, harem overtones, and creepy androgynous elf loli aside, Momoga himself simply isn’t a likeable character. He behaves stupidly at every turn. He tests his power by making someone else fight an elemental creature he intentionally summons to be weak. He can communicate telepathically with Sebas Tien, but makes him climb six stories in the guild hall to deliver a report to him. He can teleport at will, but makes others scout places for him that he should know by heart after 12 years in the game. It’s possible he’s just an asshole.

His first act is to make everyone bow to him and swear fealty. Yep, he’s an asshole.

The worst part of Overlord is that the entire episode was unnecessary. There are no villains. The entire cast is introduced as guild hall guards, but there are no intruders. Momoga is the only human in the game, so he has no player rivals. Since he has no friends or family in the real world, there’s no issue with staying in the game and forsaking his past life. This lack of struggle between reality and the gamer-verse makes the entire exposition about Momoga being in a game in the first place pointless. Refusing to add any in-game problems on top of this is simply boring. Overlord could have just been a series about a skeleton king doing what he does in whatever fantasy realm with no need for the lengthy exposition or false hook.

Plus it would be a ton cooler if Momoga were a real mage who could summon real four-armed ice-raptors with axes. Making it a game prohibits this from being an impressive skill.

We can probably skip the usual bit about minor uses of CGI and how the musical ambiance affects our mood as we watch Momoga faff about for the first ten minutes of the show, right? When there’s absolutely no substance to your pilot, it’s not really necessary to pick apart whether the outro song works because no one should be forced to make it that far. Overlord fails to cash in on the MMO/anime crossover idea because it’s not about anything. Absolutely a waste of time. 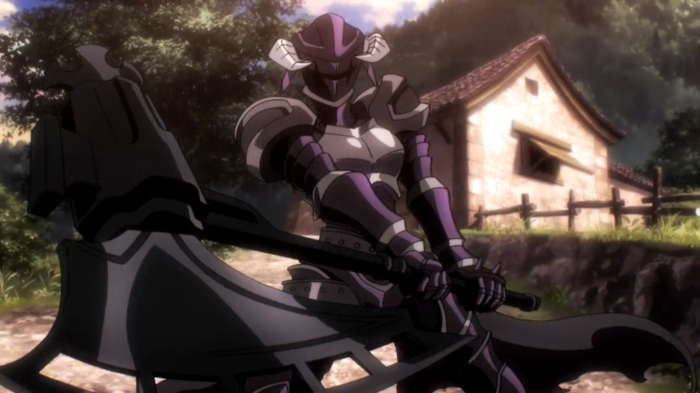 Too bad this scene happened never.

One thought on “Overlord”