The plot to Shokugeki no Soma makes it sound like a mundane slice of life with a little bit of Cooking Mama flare, but what’s in store is actually an ultra high-intensity series reminiscent of Hell’s Kitchen. Soma sports absurd, often unintentional comedy that leaves you wondering what the hell you just saw — in the best way.

Even the initial plot is a ruse. The series is listed as following Soma as he works at his family’s restaurant, challenging his master chef father to cook-offs in the hopes of defeating his dad and taking over as the lead chef. 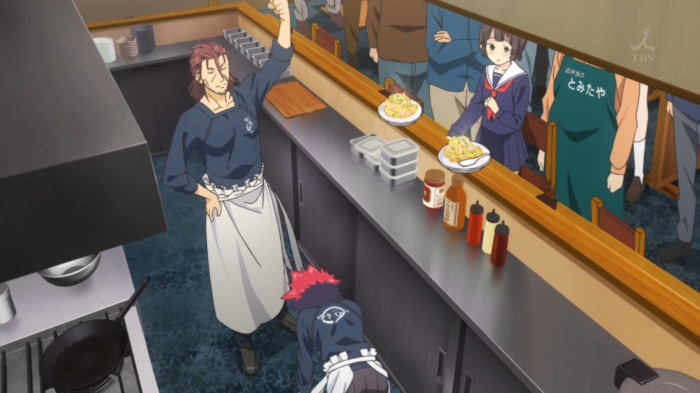 Unsurprisingly, the kid who thinks squid and peanut butter are a good combo has lost almost 500 times.

This plot lasts for all of a couple minutes as Soma blazes forward in a beautiful effort to derail itself. Soon, Soma is challenged by a city building planner who wants to knock down the Yukihara restaurant and build a skyscraper in its place. Armed with only his culinary skills, Soma’s singular option is to give everyone the most insane mouthgasms ever.

I have to admit that I’ve never seen a visual depiction of a foodgasm before.

Soma is ecchi, but rather than using perverted scenes for purely lewd reasons, it makes them into a comedic experience. The consumer’s appreciation for fine cuisine is almost always a hilariously orgasmic experience that’s so over the top it’s impossible not to be ridiculous. 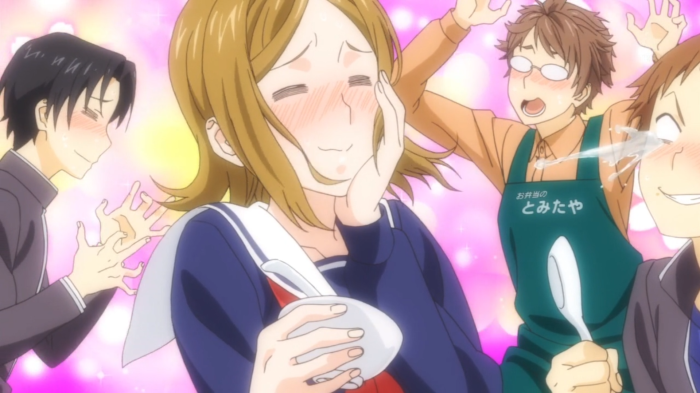 Everyone. Losing. Their. Shit.

Soma mocks itself endlessly. Cooks seem to raise their power levels Dragonball style and ingredients are introduced as though they were enemies being targeted by a mecha. Even the music is a running gag, with angelic choruses singing whenever someone takes a bite of culinary genius. What’s more, the food itself is surprisingly well-animated. It’s not hard to look at some of the dishes and salivate. 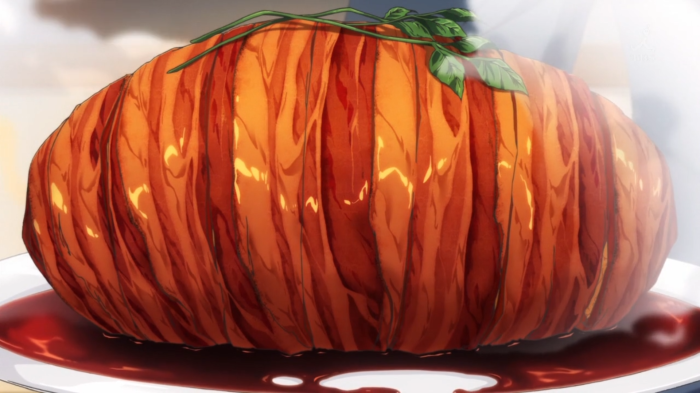 The bacon-wrapped lady-boner is on special.

The pilot leaves off with Soma heading to an elite culinary institute with only a 10% graduation rate. There, he will compete against other top cooks for the approval of a master chef who is way more attractive than Gordon Ramsay. The Episode 02 preview featured a woman in a sauna with an ape and a naked old man flying over a crowded room, so there’s a lot of potential for the series if it keeps up the comedy without becoming redundant. 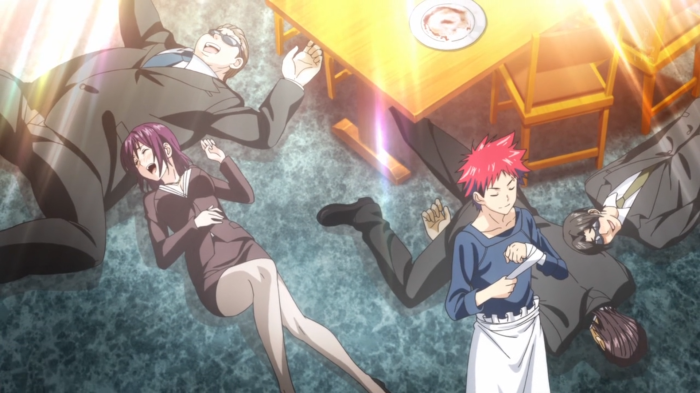 Which one is having the best food coma? I’m voting for the guy completely face down with his hands by his junk.