The pilot of Death Parade seemed to have it all: love, betrayal, horrible secrets, terrifyingly dark human brutality, the fates of heaven or hell looming before two tortured souls, and…a game of bar room darts? The problem Death Parade seems to instantly run into is the question, “Where do we go from here?” After the first episode, everything feels a bit reminiscent of Hell Girl — a series that became very boringly episodic very quickly despite its four season run.

“He thought he’d be okay to just grab Liz, go to the Winchester, have a nice cold pint, and wait for all of this to blow over.”

The whole gimmick of the show is fairly simple: two people who died at the same time appear in a bar room stand-in for limbo. They don’t yet realize they’re dead and are led to believe that failing to cooperate with the arbiters of purgatory might get them killed. The two people are coerced into playing a bar game, like bowling or darts, and their memories return to them as they play. Depending on how cut-throat or generous the people behave, their souls are judged for destruction or reincarnation. 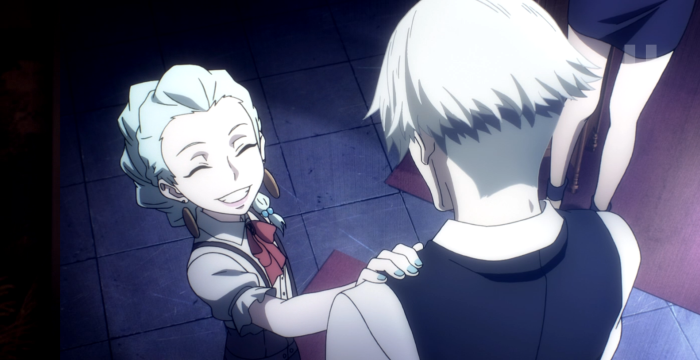 Great, synopsis out of the way. We really do hate having to do that, but it’s necessary to consider how a series based on introducing two new characters every episode could possibly avoid being, well, episodic. The answer is that the humans simply become tools for us to witness the development of the arbiters. This is a great way to give us a series arc, but so far the arbiters aren’t nearly as interesting as the frenzied, repentant, or hate-filled humans they encounter.

“Take him instead! His breasts are much more supple! You have to touch them to believe!”

This is a fantastic series to watch if you have a friend who just can’t stop trying to shout out plot guesses through a movie. Each human to be judged is given a unique personality and rich history despite the time constraints of the episodes. It’s easy to feel genuine empathy for both despite knowing their flaws and that one of them will soon be obliterated. There’s a very bleak pleasure in trying to figure out who the unfortunate party will be. Guessing correctly rewards you with an uncomfortable victory. Even though you’ve always got a 50/50 chance of being right, the reasoning going into the judgements makes the show feel very crisp and smartly done.

“There, there. We all make mistakes. You didn’t tell your mom you loved her. I accidentally destroyed a good soul for all eternity. Same thing.”

And just as you’ve thrown in your lot with the arbiters and correctly condemned a poor soul to oblivion, you find out the arbiters can be wrong and you can be wrong right along with them. You share in the arbiters’ sense of disappointment and shame.

This is a very heavy series despite the jazzy dance number going on in the intro, which makes Death Parade look like it might be a Baccano-era comedy. Indeed, there is comedy to be had, but it is very swift, subtle, and dark. Most of the time when you want to laugh you have the disturbing feeling doing so might make you a horrible person. These heightened emotions are urged along with subtle jazz scores one minute and instruments sounding like they’re choking stray staccato notes to death the next. It’s a very masterful ensemble designed to get in your head and keep you on edge.

“Do I want to play as me, or me, or me…” It’s almost like this choice is a split-second commentary on having to be satisfied with who you are in real life or something.

Death Parade takes its time with character building, but it can afford to since the bulk of the series takes place in a single room. Considering the series has virtually no buildup time before throwing you into a judgment situation along with the first pair of doomed humans, it’s easy to pick up and watch on a whim. However, it’s likely premature to think that Death Parade has solved the “Where do we go from here?” issue entirely. How many bar games can they work in? Are we going to see people playing beer pong to determine if they go to heaven? Does being able to win at beer pong say good things about you? Despite its best efforts, we might see Death Parade limited by one of its chief plot gimmicks if nothing else.

And then there’s shit like this out of nowhere.

It’s a true struggle to find anything to criticize with Death Parade. The arbiters are a little stiff, but only for a few episodes. The plot seems quite ridiculous, but that feeling runs and hides during the first torturous cringe of the first episode. This series will continue to be a great thrill as long as it keeps the ideas fresh and knows when to stop.