Battle Spirits Burning Soul is the seventh anime series in the Battle Spirits franchise. The show is entirely centered around selling collectible cards to young children and has done a much better job of marketing trinkets than making a quality animation. If you like watching Yugioh’s cousin playing Digimon with cards he made out of glitter and craft paper, this is the series for you. 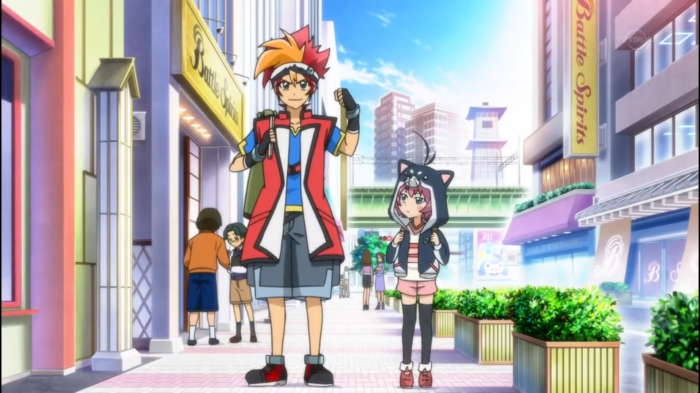 Every single storefront or banner is just the Battle Spirits logo. Nothing subliminal here. Keep walking.

The entire pilot episode takes place in a gym and features a couple tutorials disguised as trainer fights. The first episode is designed to showcase some of the Magic the Gathering-esque rules so kids can rush out and buy their first decks and start playing immediately. It’s painful to admit, but it’s actually clever in the way it presents the rules. We start out seeing a little kid get utterly destroyed as a lesson in what not to do.

“You’ll never defeat me as long as I’ve got my ninja star nipple protectors!”

Once that annoying brat is out of the way, totally-not-Yugioh (his name is Yukimura but that’s way harder to say than Ash) comes in to give a big spiel about a card captor’s deck being his waifu for laifu. He holds his own deck on high like it’s the holy grail and a jet flies out of nowhere to serve as his battle platform because he’s just that cool, and if you buy enough cards to get the monsters he has, maybe you can be as cool as him, right?

These cards are so noisy my eyeballs have gone deaf. I don’t even know what that means.

It’s exactly the type of series you’d expect considering Bandai made the animation to sell a product and not the other way around. There have been a few video games and the cards are ridiculously popular in Japan, but they’re pretty much a flop in the West so the terrible CGI and how-to nature of the episodes will probably be horrendously uninspiring for people outside of its homeland.

Someone actually paid for this CGI.

It’s not difficult to see why this series/game is unpopular in the West. From a market standpoint, Pokemon has overtaken everything with kids, while adults tend to be in the MTG loop. Nothing popular in the West requires buying a special board and cutesy little gemstones — these accessories make it harder to squeeze in a game in the halls at lunch. It also doesn’t help that the monsters have names like Ikusatokage and Dinonychusaw that most eight-year-olds can’t say or spell. And how can you combat the catchiness of Pokemon’s theme song? Well, it’s not with Engrish lyrics like “checkmate x dive” and “your soul is calling yourself now.” Making Yukimara’s catch phrase “My soul is burning” was also probably not the best choice for expanding the market westard. Westerners don’t generally want their souls to burn for some reason.

Can he even see the cards copy-and-pasted into his hand with those upside-down eyes?

The real limitation of the series is that it tries to copy the traveling-trainer-takes-on-gyms routine that’s quickly becoming a cliche. The problem is that Yugioh-hell-no starts out as a Class S badass. There’s no climb from the bottom, no bonding with the souls of his cards, no losses to be had. He just walks in and kicks ass and everyone wants to have his babies. It works when you just want to sell cards and pass off a glitzy tutorial as an anime, but there’s no mystery why this animation didn’t take root outside of Japan where children couldn’t rush out and buy the merch. Without being able to play the game yourself and with the hero already at the top of his game, there’s really no incentive to spend time on this series.