Punchline is the most insane romp through Panty Land we’ve ever experienced. The cast includes a fruit-based super heroine named Strange Juice (whose weapon is a giant straw), a kid who continuously destroys the earth when he gets aroused, Velma from Scooby Doo, and a perverted cat spirit. Obviously, you can look forward to a very, very serious plot.

The only thing in Punchline as shallow as the plot is Strange Juice’s gene pool.

The opening for this masterpiece really sets the stage nicely for what we can expect from the anime as a whole. The intro music is an upbeat piece that is reminiscent of catchy ’80s fare like the Gummi Bears theme, but somehow even more annoying and set to non-stop panty shots. The best part of the opening is when the music fades out and you think it’s over. No dice. It kicks back in for a few seconds to give us the following shot one more time just in case you’re too dense to have figured out why the series exists:

What a beautiful set of grapefruits.

The end roll is not so cringeworthy in terms of music. While it’s a very typical anime track, it feels strangely out of place after an episode of Punchline. The entire show is so full of unhinged, deranged insanity that an amiable pop radio track with a single female vocalist is confusing. Luckily, to blunt the seriousness, we get cute little chibis of the characters running around doing nothing as the episode fades away with no preview.

Regretfully, we need to  take a second to address a situation that is going to pop up in this series in volumes that can only be measured by a metric unit known as the “shit ton.” It’s our old friend, the classic fanservice nosebleed. Punchline takes this already overused and ridiculous trope and shoves it into a wood chipper with eleven dead horses. Worse than their flagrant overuse (i.e. existence) is the fact that the nosebleeds become part of the plot. When main character Yuta sees a pair of panties once, he powers up Majin Vegeta style. Should he see a second pair of panties, the nosebleed becomes too strong and will actually destroy the world multiple times.

A much better series finale to Dexter.

Punchline is so intentionally ridiculous that it’s impossible to take a second of it seriously. When the show is trying to set up any kind of story or plotline, we find ourselves just waiting for the next terrible pun or slapstick gag. This makes for some fantastic moments that will have you feeling like an imbecile for laughing so hard at something so idiotic. The very first episode introduces us to a snarky cat with an affinity for dirty videos, as well as a low brow homage to the classic Sailor Moon transformation.

This is not what Yuta meant when he said he was into catgirls.

The animation for the series is decent and colorful. It’s probably only thanks to having Gurren Lagann veteran Yutaka Uemura as director that the show has a budget for anything more than kids with crayons videotaping a flip book. All the same,  Uemura’s history at Gainax should lend him experience in adequately combining plot and fanservice. Perhaps as a result, Punchline‘s artwork lands somewhere around par. The character animation lacks detail (it seems pupils are optional), most of the hair is bubblegum style, and much of the line work is thin and lacks dynamics. It’s tempting to chalk this up to stylisitic choices, but this sort of minimum character quality is another unfortunate trait inherent in fanservice.

Soulless round-eye American devil has no pupils because eyes are the windows to the soul and gaijin has no soul. NO SOUL.

While the characters are low in detail, their movement is actually animated well enough. The introduction to Strange Juice is an example of decent frame by frame action and even some well-used slow motion. However, these scenes are often detracted from by the same overt CGI that’s become a plague to so many series this season. Trying (and failing) to make some things photorealistic while your characters are colored with the paintbucket tool in MS Paint just doesn’t mesh well. 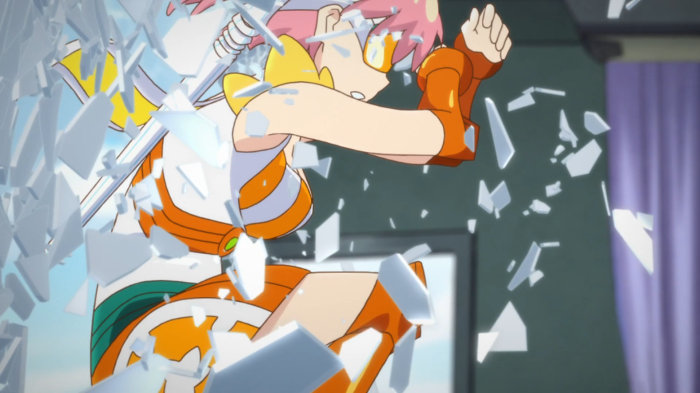 How fast do you have to be going to break the CGI barrier?

It’s immensely difficult to say if the touch-and-go plot is satisfying. Between all of the panty shots, nose bleeds, painful puns, swimsuit parties, nighties, cat porn, and the conveniently stocked house of girls, there has been precious little time allotted for developing a real story. Typical of writer Kotaro Uchikoshi, what plot has actually shown up plays out like an RPG. Token male character Yuta is struck by some sort of lightning, rescued by a pair of girls, and whisked away to live as a ghost in a house where he must find a hidden Indian spellbook. In keeping with Uchikoshi’s favored video game logic, time can simply be rewound for a do-over should Yuta see too many glorious pantsu and accidentally destroy the planet. If that doesn’t make sense, welcome to the club.

When was the last quicksave?

There is a light whiff of an actual plot as we roll in to episodes 4 and 5. Punchline even backs off the fanservice long enough to develop the characters a little. We’re presented with a small tragedy in the attempt to tug on our heartstrings by making us care about characters we still barely know halfway through the season. The real tragedy is that if there’s any story to be had, the foundation it’s laid upon is made of lacey silk undies and it doesn’t take a structural engineer to tell you how long that will stand.

And everyone always assumed Daphne was the harlot. Way to go, Shaggy.

Despite the fact that Punchline had us spitting our delicious cup-o-noodles all over the keyboard a few times, the anime as a whole isn’t nearly as palatable [Editor: Shoutout to Yakisoba for making the best diarrhea packets 89 cents can buy]. It is almost impossible to watch this show without feeling dirty all the way down to your soul. It’s not Playboy Magazine where we can ignore the centerfold and read it for the articles, as all adult men do. Punchline is all centerfold with a P.S. written on the back cover in purple crayon. By episode 5 the plot is still entirely incomprehensible and it’s a quite impressive if you manage to make it that far.

Strange Juice hearts us but we’re having difficulty returning the sentiment.