Every band nerd’s dream anime has finally been born in the form of Sound! Euphonium. This series follows a handful of young high schoolers as they’re introduced to big-band concert playing and their passion for music flowers. Sound is a coming-of-age story sure to be nostalgic for anyone with an instrumental background, while the fantastic scores might inspire the less musically inclined to give it a whirl. Our first question was how it would be possible to make an entire series based on some kids sitting in rows playing music, but admittedly, we’ve seen series based on less. Sound delivers a meatier plot than you might assume. We follow main character Kumiko’s life with insights into her family dynamics, school history, fractured friendships, and personal insecurities. The episodes include nice touches of authenticity: teachers telling girls to stop hiking up their uniforms, worry over being herded into unwanted social roles, apathetic instructors, and a plethora of other clues that key old-timers in to the writer’s understanding that high school is actually generally a pretty horrible time for a lot of people. But we’re sure no one reading about an animation about playing in high school band could relate to any of that, right? 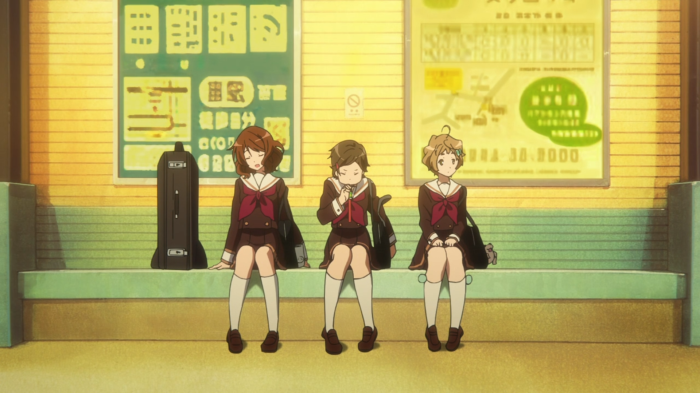 Who can resist a girl who can lug around an instrument as big as her own body?

The authenticity is carried over in the depiction of all the instruments. The artists definitely did their homework and used plenty of references to make sure each beautiful line of every valve was where it should be. Atypical of most animes, the students are not all inherent virtuosos and it’s common to hear a clarinet honking out of tune or a saxophone squeaking in the middle of a piece. Newbies struggle to make noise on mouthpieces and to control their breathing while the try-hards get flustered by filthy casuals. Yep. It’s band. The only time this nerd has ever been to “first position” is on that trombone.

While all of this is quite relatable as a band veteran, there’s something that sticks out as a little odd: there seem to be an inordinate amount of girls in band club. Perhaps it’s a cultural difference, but most Westerners don’t see a lot of females opt into playing the tuba — at least, not ones as cute as Hazuki. By the third episode, there are basically two at-age male characters with names. Sound might be pandering a bit to a female audience, but it is distinctly not haremesque, so it’s easier to forgive them for trying to tell us that there’s a girl as hardcore about being in the trumpet section as ex-BFF Reina. These sorts are definitely the exception out here in the New World. Seconds before Reina plays her rendition of Dr. Dre’s “The Next Episode” full blast.

The characters have a nice mix of personalities. When Sapphire names her contrabass “George,” Hazuki decides to name her tuba “Tubacapbra.” While the girls all share common interests and concerns, they don’t fall into standard anime archetypes very easily. Glasses girl is the most extroverted? The main character isn’t instantly liked by everyone for no reason? Senpai notices her right away? Even the teachers have distinct personalities, with one who at first seems to be pleasant proving himself a cruel taskmaster with little empathy for his students. 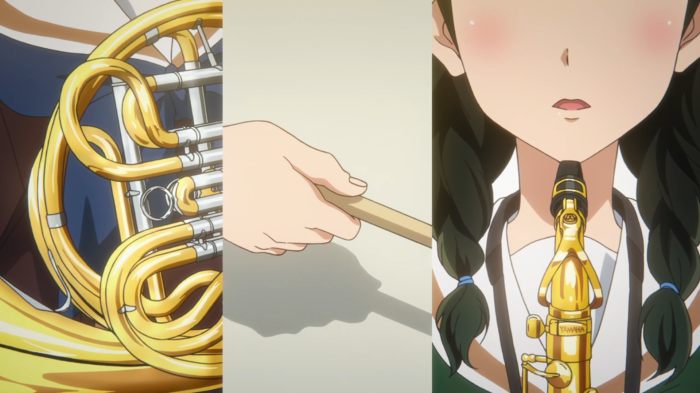 They even made the instrument an authentic Yamaha instead of Yomoho or some other stupid anime knockoff.

We get that the show is about the joys of music, but it’s still odd to see everyone just thrilled to death to be playing, talking about the living spirit of music, and personifying their instruments. Especially as peasant-tier Americans who are commonly only able to choose between band or choir, it’s both jilting and inspiring to imagine this much passion about the music from so many people. At the same time, the band seems to have lost all of its good players due to their frustration with the slackers. This means the incoming first-years will have to carry more slack than a platinum League of Legends player in solo ranked queue. We understand that wasn’t a music analogy, but if you didn’t get it, it just means you’ve invested your free time more wisely than the rest of us.

Unfortunately, that’s basically the entire plot so far: The first years need to get their music chops fast to help the team get to nationals. It’s not terribly offputting as a huge focus, naturally, is the music. How many animes have theme songs featuring flutes and trumpets? The level of pieces able to be played makes sense for the age of the characters, but the music director did a fantastic job of inserting quality pieces wherever possible. Both the opening and credit themes are catchy and well-chosen enough that you don’t mind sitting through them more than once. It would have been quite egregious if an anime about music had shown poor taste in its subject, but Sound pulls through with its tracks on every point. 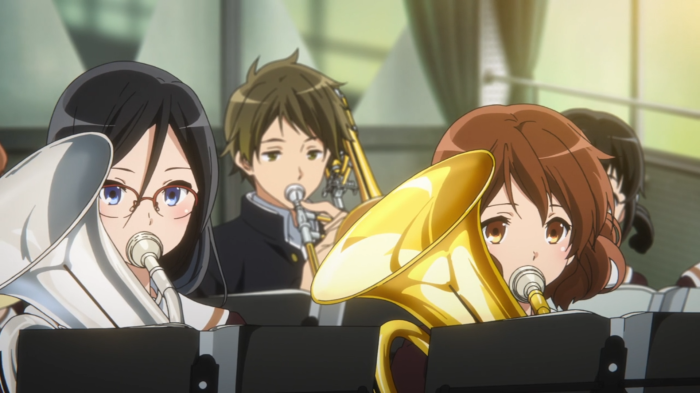 Asuka and Kumiko are all about that bass.

The animation itself is surprisingly well-done. It’s hard to imagine that a novel only a couple years old would inspire animation that looks so high budget and detailed. With so many instruments, there are plenty of fine lines and light sources to worry about, but the studio seems to have nailed it in most cases. If there’s any complaint, it has to be geared at the instances where CGI comes into the picture. Often, the “beautiful instruments” we’ve been droning on about are just copied and pasted into characters’ hands for quick shots. There are backgrounds with particular types of vegetation that are quite intrusive (that sounds insane but you’ll know it when you see it). Occasionally, you get some obviously CGI door signs and other odds and ends which really have no point in being computer rendered. Other than the occasional landscaping snafu, the artwork is crisp and atmospherically sound. 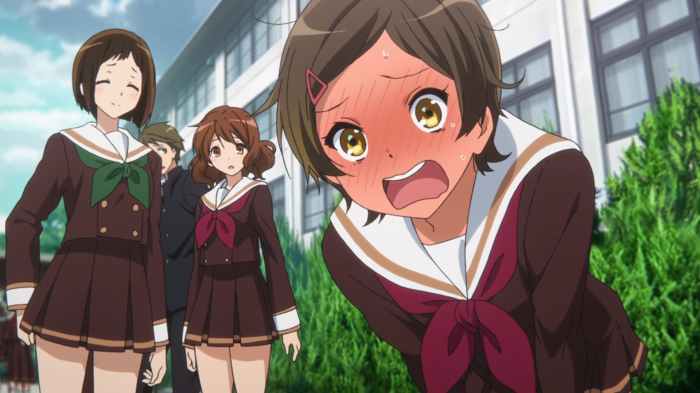 “Okay art team, we need you to make the trees in the background just detailed to all fuck in this scene. Don’t worry about giving anyone a nose, just pour all our resources into the shrubbery.”

As enjoyable as Sound is through the first few episodes, it’s difficult to make it a recommendation to people who don’t have a musical background. Because the goal of the plot is simply to have the students get to nationals, it can be conjectured that one of two endings happen: They get there and magically win through the power of hard work and friendship, or they get there and fail but hey they have the power of hard work and friendship. It’s a story which necessarily can’t get too deep or pose too many interesting questions. However much we happened to like it personally, we have to acknowledge that this is because it reflected our own very acute experiences and won’t be appealing to many people who don’t have fond memories of learning what embouchure means. We sincerely hope our fellow music nerds will give Sound a shot and make it successful. 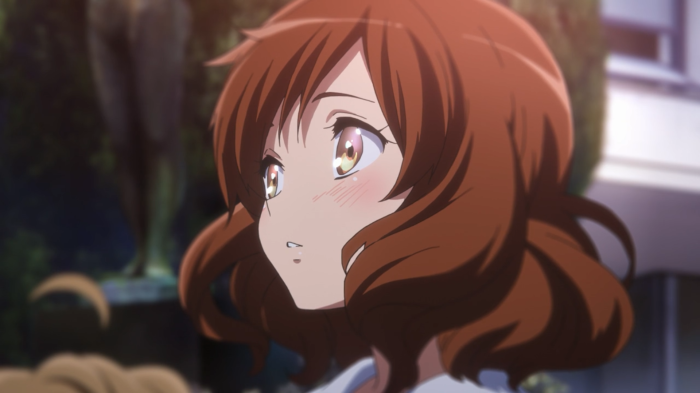 She can see it coming in the air tonight! And she’s been waiting for this moment for all her life!

To everyone else, we regretfully have to say that Sound probably won’t be part of your watch schedule.

One thought on “Sound! Euphonium”