This is our first impression write-up. Check out our full season review!

Is It Wrong to Try to Pick Up Girls in a Dungeon? Ask any twenty-something male living on Mountain Dew and playing MMOs deep into the night and the answer is a resoundingly desperate, “Want to voice chat?” This animation feels similar to many others in the game-world genre. You keep waiting for the characters to log off, come out of virtual reality, and wake up in the real world. It’s reminiscent of the first season of Sword Art Online, but with more boobs and less subtlety. We know that’s a low bar to crawl under, but it gets there. 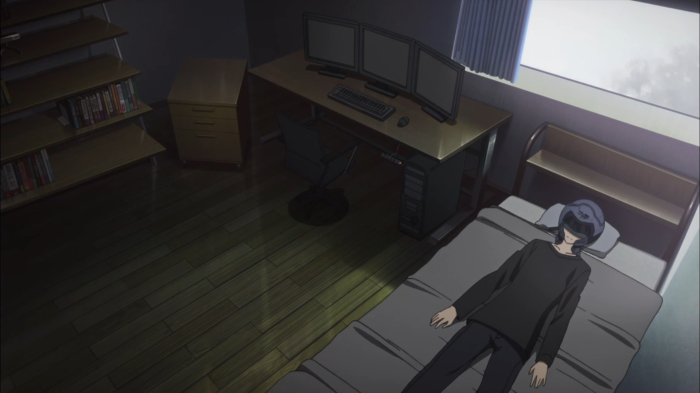 All these half-elf girls and not a single drop of hand lotion by that triple monitor rig.

Dungeon has a decent enough beginning to pique interest, but it’s teetering on the edge of a slippery slope and it’s yet unclear whether it will climb to decency or let itself slide into oblivion. There are truly hints of greatness in the show. The animation is done well enough not to cause any hindrance despite background artwork getting lazy from time to time. The characters are drawn smoothly and consistently, the lighting is used nicely to enhance moods and atmospheres, and the action scenes are satisfying (though very sparse). 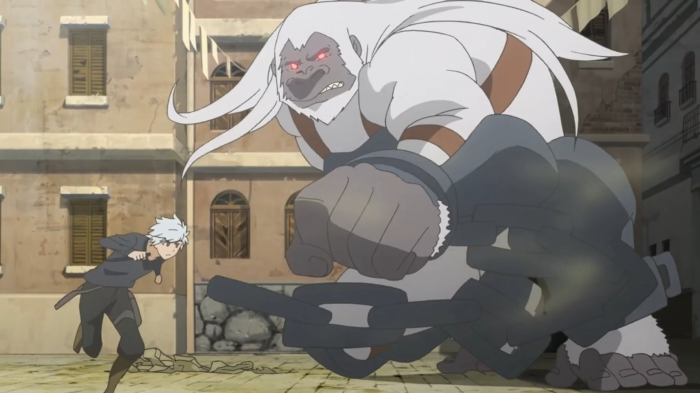 In a fantasy world with magic cat people and fallen gods, what’s the most creative enemy we can come up with? Gorilla. Duh.

The animation team seems to have put the most effort into the deaths of dungeon monsters. The event is marked by an explosion of embers and ash which looks like the beasts are being pulled back into some realm of hell. However, there is nothing extraordinarily unique about the animation quality. The CGI is obvious, but unintrusive. All in all everything looks decent, but not stellar. 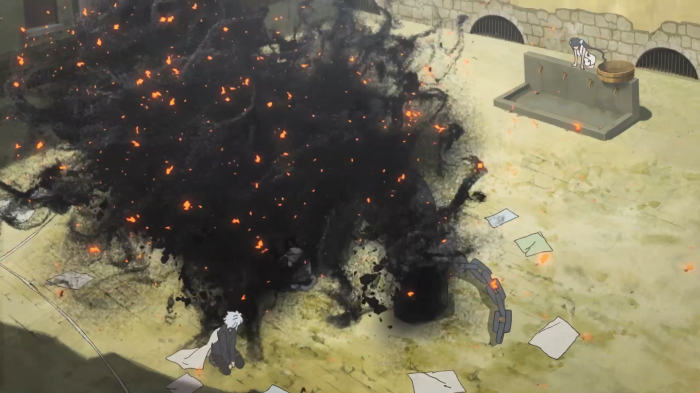 For a show that screams “dungeon crawling” in the title, we are left wanting when it comes to the ratio of time spent on monster-slaying action. The main character, Bell, allegedly spends all day every day in his hometown’s dungeon grinding out experience and money, but it feels like Adventure Time‘s Finn and Jake spend more time underground than Bell. Unfortunately, it’s probably for the best. The dungeon seems to be little more than a network of caves with unimpressive monsters strung about waiting to be knifed in the face by our hero. When Bell is actually fighting, it feels good to watch him kick some ass, but most of the episodes tend to be devoted to classic walk-and-talk. 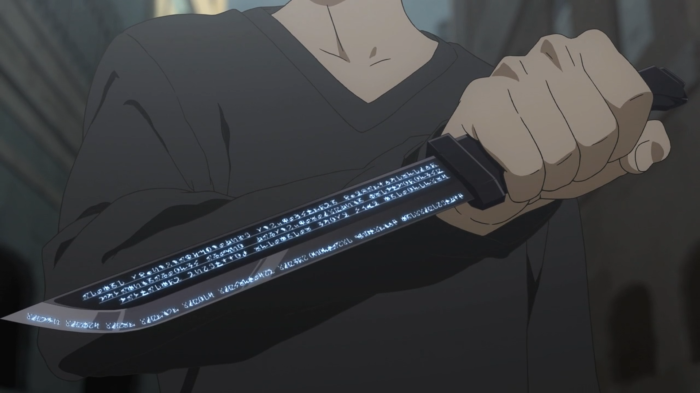 It’s a pretty cool knife to get stabbed in the face with, at least.

This is an aspect of the show which will appeal to different sorts of viewers. While the focus on character building does make the environment rich, this could easily be done without omitting what’s supposed to be Bell’s entire purpose in life. Slap in some nasty boss fights and some witty party members and we could have an experience every fantasy RPGer could get behind. Focus on the boobs and upskirt shots and we’ll have an experience every adolescent teenage boy with a box of tissues can get behind. It’s no contest. While Dungeon doesn’t spend an inordinate amount of time on fanservice, it’s still a focus that does nothing to genuinely enhance the quality of the series. Dungeon wants to flirt with tropes standard to a harem anime, but the plot is developing enough that it makes us want to believe the harem aspect won’t become a real priority. Unlike the unique monsters. “Unique” being the opposite of “ants and gorillas.”

As with many MMOs, the adventurers tend to work for the good of a guild. These guilds are led by gods and goddesses who are based on many different mythologies including Norse, Greek, Hindu, and Shinto religions (likely with more to come). They take on the traits of their mythological namesakes in ways so exaggerated that it’s difficult to find them offensive. This may simply be a side effect of being based on novels that have already laid the groundwork for the series, but it implies that there is more depth to the world than just a bunch of goddesses with giant boobs…and one without.

Poor Loki experiencing the ultimate finishing move for any flat girl in a fanservice anime: having someone overtly point out her lack of endowment for comedic purposes.

As can be expected, the deity archetypes aren’t exactly spot on, so there’s not much here for mythology nerds.  For example, in real-world mythology Freya is the Norse goddess of beauty in constant need of rescue like she’s the mythological equivalent of Princess Peach. In Dungeon, Freya quickly becomes the most terrifying aspect of the series as the first true villain we encounter. Not that she’s inherently horrifying in appearance. What’s scary is that her sinister plan may very well just be to have sex with a 14 year old boy. Genius. Please, please let there be more to it. Sarcasm aside, Bell has a special powerleveling trait that even his own goddess, Hestia, is hiding from him out of fear that he will become too powerful too quickly and leave her. In MMO terms, Bell is, like, way OP, dude. Freya trying to poach him for her own guild “familia” is completely understandable. That she’s potentially trying to do it by murdering Hestia is a bit more insane. 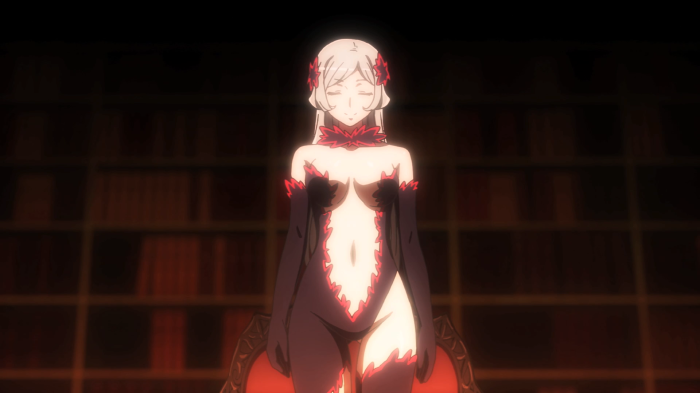 Tasks that take normal adventurers a lot of time, money, and effort are expedited for Bell because every gal with connections wants to plop just what he needs right in his seemingly irresistible lap. Going into the dungeon without lunch? A bar girl conveniently stops Bell to give him hers. It’s a major plot point that he’s poor, but he needs armor? Don’t worry, a half-elf woman from Rack City will take Bell to a special store no one else seems to know about. It’s overconvenient. While it does keep the plot moving, it also removes a lot of struggles for the main character that could have panned out in more exciting ways. 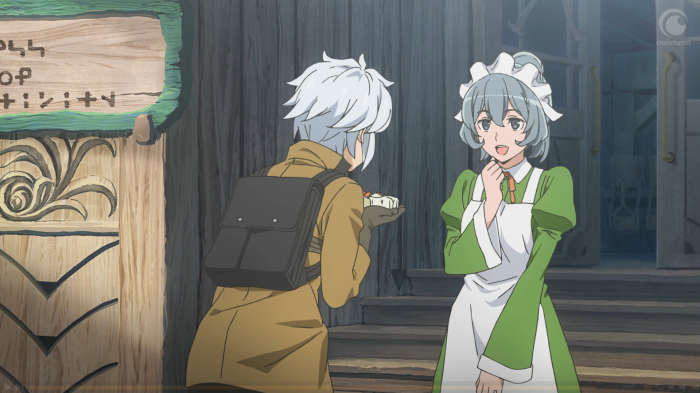 “I couldn’t help but notice you’re the only person in the entire city without food today, Bell. Please take mine, you selfish prick.”

Even Bell’s special powerlevel skill is based on his desire to impress a girl he met. The more he wants to bone, the more experience points he gets. The only reason he even became an adventurer in the first place was because his dear old dying grandfather cliche told him that it would help him get chicks. So far it doesn’t seem like Gramps was wrong. If only Bell understood basic reproduction, he could retire happy with his objectified women spoils at the ripe old age of 14. 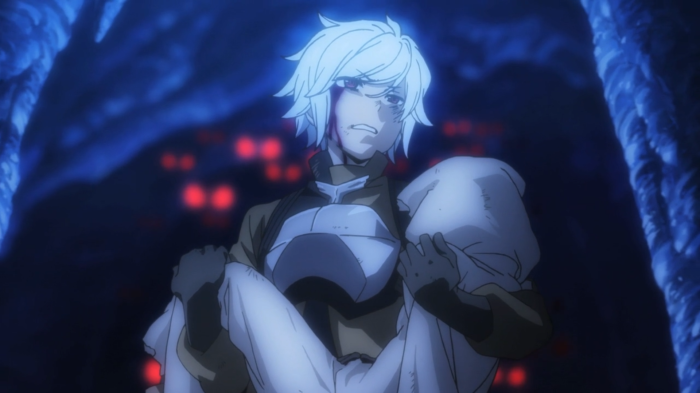 We realize that voluntarily watching a show called Is It Wrong to Try to Pick Up Girls in a Dungeon sets certain expectations, but we at least hope the main character becomes able to think for himself. Ideally he will become much more self-sufficient as the series develops and doesn’t have to rely on blind luck and unconditional adoration. And now that we’ve taken a nice steamy one all over this anime, we have to take a couple steps back. If you’re into the whole sword and sorcery fantasy genre, this one will be worth a trial run. It has just enough substance that you want to know where it’s going. There are plenty of things left to be desired, but the potential is there. The bottom line is this: despite being an amalgamation of things that make us roll our eyes, that pile of done-to-death tropes and fanservice cliches still manages to be fun in this case. While more content is needed to make a true recommendation, the tale is endearing and the characters are likeable enough to see where things go from here. 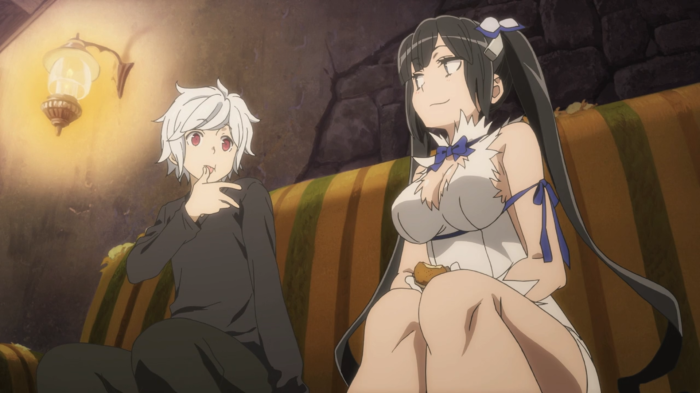 Bell looking stupid and Hestia wishing she were that thumb. The entire plot of the series.

3 thoughts on “Is It Wrong to Try to Pick Up Girls in a Dungeon?”