This is our pilot review. For more information, check out our complete season review.

Battlefront presents a unique story from the earliest panels and does its best to develop a rich world. The series features a city teeming with a mix of humans and interdimensional monsters and successfully makes it feel normal. Despite a looming fate-of-the-world trope, the anime might prove to be an effective combination of strong characters and unique environments.

Totally not the diner from Men in Black.

Perhaps the largest flaw with Battlefront is its approach to exposition. The episodes aren’t above an old-fashioned narrational voiceover, but it’s just lazy writing when you’re given key plot points in the form of a text brick on a computer screen. At the same time, it’s hard to hold this against Battlefront. It seems to understand that its plot isn’t all that deep and doesn’t warrant a three episode build-up. While it’s not exactly masterful delivery, at least it gets the exposition out of the way without pretending to be something greater than it is.

If your series features an interdimensional monkey hamming it up for the camera, we can’t fault you for not spending time explaining plot.

The tell-don’t-show approach gives us the gist of the show right off the bat. In what was formerly New York City, an interdimensional portal to the alterworld has opened and transformed the town into a paranormal melting pot for monsters, magic users, and ordinary humans. We follow Leo Watch as he joins a secret society called Libra to aid his fellow superhumans in defending the chaotic city — and the outside world — from extraordinary criminals.

Most of the city doesn’t really look worth protecting.

The animation of the series is generally well done. The convincing backgrounds do most of the heavy lifting when it comes to creating the authentic atmosphere of the anime. Battlefront does get lazy sometimes, such as when it uses still image swipes during voiceover narration. It reciprocates for this by not resorting to intrusive CGI for mundane things, opting to use a few frames of animation where sufficient. The show shies away from computer animation whenever it’s not absolutely necessary. This goes a long way for immersion considering we’re currently in a period where the low-budget effects of emerging series are generally quite overt. 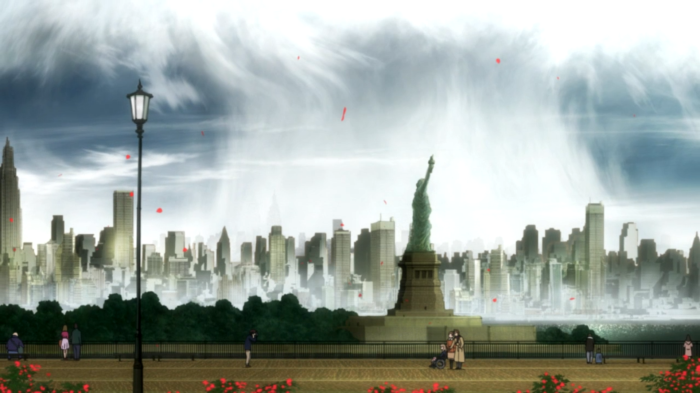 Bonus points whenever a series has the guts to claim the real NYC instead of a Gotham-style stand-in.

The score is probably the most notable thing about Battlefront due to its track diversity. It’s not necessarily notable in a good way, though. The first episode throws some jazzy tunes our way, but as a Westerner this isn’t very reminiscent of New York. It feels more suited to someplace like Louisiana, or a period piece like Baccano. The grunge-style that pops up during a comedic bit in the second episode feels like Battlefront is trying to pay homage to FLCL in a way destined to be ineffectively unnoticed. The third episode again sweeps in a completely different direction and attacks us with Beethoven. Combine the sporadic, often out of place soundtrack with a wholly underwhelming intro theme and it’s difficult to tell whether what Battlefront is trying to do is really working for it or not — which means, essentially, it’s not.

The awkward music is hit and miss, but the visual atmospheres are slam dunks.

Leo Watch’s gimmick is that he has the eyes of the gods, considered a prime artifact even in the alterworld. They can see the past, present, and bits of the future, which makes him an important target of criminals wishing to possess such an ability. The other members of Libra have various powers: partner Zapp Renfro is a blood-weaving vampiric sort and team captain Klaus von Reinherz is Beast from X-Men because coming up with powers that haven’t already been done is impossible. Such pop culture influence over Battlefront is abundant. Zapp attacks Klaus in Cato v. Clouseau fashion, the villains are straight out of Ninja Scroll, and the alterworld stirs memories of M.C. Escher’s images. Still, it’s unfair to label this as reappropriation rather than simple influence because Battlefront manages to combine these elements to make its own world and characters. 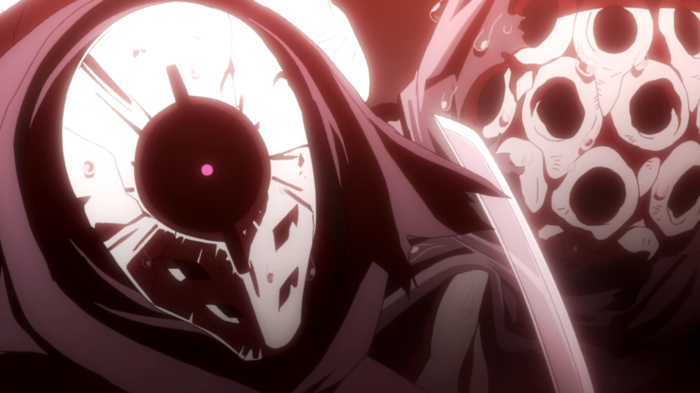 Just waiting for the creature on the right to get chopped open and spray hornets everywhere.

The biggest thing standing in the way of a recommendation for Battlefront is the lack of action. When the shit hits the fan, it’s over in a matter of seconds without much in the way of actually being animated. The conflict in the entire third episode is a chess style match between Klaus and a crimelord. This would be forgivable if the episode weren’t beating us over the head with the fact that the game is a big metaphor for the struggle between the two worlds, good and evil, the outside world and the city, and a bunch of other stuff we’re not sure if we care about at this point in the series. Despite all the action being glossed over, the anime doesn’t make it up to us by posing any greater questions. There’s really no lasting conflict, so the purpose of the series is vague and seems very episodic and meandering.

Certain as the sun rising in the east — tale as old as time, song as old as rhyme.

The series needs to decide what it wants to do. We’re shown villainous Femt, the self-proclaimed King of Depravity, but he disappears for the entirety of the third episode. Leo meets a “cute girl” with whom he seems a bit smitten, but she doesn’t even have a name yet. Libra teammate Chain Sumeragi has yet to serve any real purpose. Leo’s pet monkey seems demoted to a mascot after we’re told of its incredible powers in the pilot. It’s possible that Battlefront could become one of the better animations of the season, but right now it doesn’t have enough direction to warrant being on your watch list every week unless you’ve got time to throw into checking out a third or fourth series.

There will be no breakfast cereal jokes.

One thought on “Blood Blockade Battlefront”