SNAFU follows the life of the unfriendly and withdrawn high school student, Hachiman Hikigaya. After being shunned in grade school by his classmates, Hachiman carries his resentment into Sobu High School. His chain-smoking advisor tries to leverage Hachiman’s considerable empathy and intelligence into personal development by enrolling him in a club with the school’s most talented student, Yukino Yukinoshita. Added to the mix is hyperactive redhead Yui Yuigahama, who has harbored a crush on Hachiman since the day he nearly died saving her dog from being run over by Yukino’s limo. The trio creates the Service Club, collectively forming anime’s version of Pulp Fiction‘s Winston Wolf. In other words, they solve problems.

The Service Club solves the problems of its peers, but its members are quickly infuriated as they bear witness to some of Hachiman’s dubious methods. While he’s more than willing to play the villain if it means getting an outcome he needs, his comrades hold Hachiman in high regard and often view his actions as beneath him. Ever the anti-hero, Hachiman continues to find himself at the epicenter of an orgasm of high school drama continued flawlessly from SNAFU‘s unexpectedly good first season. 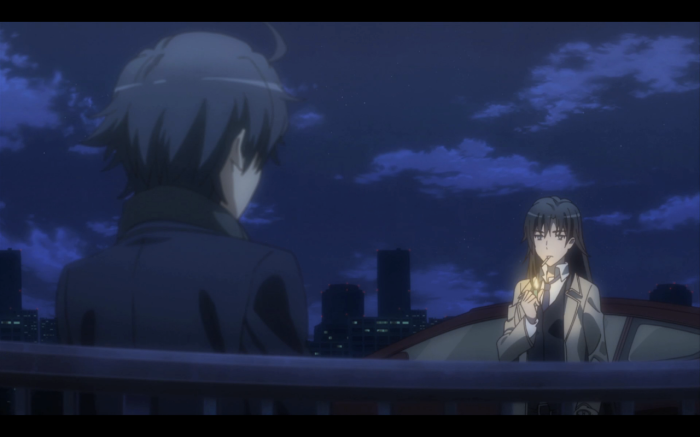 It’s completely normal for a teacher to meet a student at night outside of city limits for a smoke and other totally legal activities.

The overarching theme of the series remains the quest of people around Hachiman to convince him of the sincerity of their friendships and feelings of desire. Many of these efforts are spearheaded by one of Hachiman’s caring (though sometimes violent) teachers in her attempt to steer the student away from isolation. While some of these friendships resulting in blossoming love is a boringly normal anime trope, the plot manages to remain compelling because the main character finds himself acknowledging and rejecting the developments. Where most animations feature a clueless male figure surrounded by his harem, SNAFU gives us a young man who has a strong need to be left alone. He does not trust in others due to his fear of past humiliations being repeated and sincerely views the affections of others as threatening to his peace of mind.

Apparently blurting “Please go out with me” from five yards away with a stranger there doesn’t win over the ladies. Who’d have thought?

Hachiman’s refusal to acknowledge affection in turn victimizes club co-member Yui Yuigahama, an insecure ball of energy who has done everything short of confession to communicate her feelings to Hachiman. While Hachiman is presented as an intelligent and empathetic character, his interactions with Yui make us genuinely question the validity of those claims. Every act of kindness and love from Yui only escalates Hachiman’s suspicions of her. We see what appears to be a very un-empathetic Hachiman truly in fear of being humiliated by her if he allows Yui to cultivate his feelings. He thus initially acts oblivious to Yui’s overtures until her persistence and warmth force him to reconsider.

The poor girl’s remix of The Whisper Song has so far failed to win Hachiman’s heart.

Meanwhile, preppy-boy heartthrob Hayato Hayama begins to find himself deeply affected by Hachiman’s self-imposed isolation. As a friend, he sets out to discover the source of the protagonist’s past humiliation. The casual cruelty of children’s social hierarchy is laid bare as Hachiman recounts being instantly cut out of former friend Kaori Orimoto’s life after confessing his feelings for her. Hayato decides to deal with things personally despite being portrayed thus far as a demure and non-confrontational character. SNAFU delivers one of its most intense tailspins as Hayato becomes fed up with those who herded Hachiman into his disconnected lifestyle and sets out for revenge.

It’s fascinating to see such a gentle (and at times, cowardly) character finally bare his fangs, devouring Kaori after leveraging her interest in him into a double-date with Hachiman. The viewer could hardly predict that Hayato, with his pretty-boy façade, would confront Kaori. Instead, we’re treated to a thrashing of Hachiman’s loud, annoying junior high crush. Red for fire, black for death. Hayato earns his way into Valhalla by driving an axe into Kaori’s ego in front of Yui and Yukino in a surprisingly vicious coup de grace.

Hayato’s triumph is as satisfying as it is troubling. It demonstrates that in protecting Hachiman, Hayato is begnning to adopt some of his friend’s methods. Although Kaori richly deserves her comeuppance, even Hachiman wonders what the fuck is Hayato doing? In facing his own romantic pursuers, Hayato draws on the same hostile actions. This leaves the viewer wondering if these methods might begin to consume the once-gentle idol. As Hayato becomes less approachable, we see the danger Yui and Yukino have always recognized lurking in Hachiman’s behavior. As Hachiman learns to be a rounded human being, Hayato is becoming jagged with self-doubt. SNAFU handles this transition gradually and effectively.

Hayato beams after he publicly bitch-slaps his victims.

This sort of ambivalence and ambiguity is where SNAFU displays its excellence. Viewers of the second season will find Hachiman’s behavior becoming less and less predictable thanks to the relentless efforts of his friends to integrate him into their lives. Hachiman now must cope with true friends and the affections of people like Yui. Just as control seems to be within Hachiman’s grasp, he finds himself dealing with new friends and the admiration of comrades like Hayato who will actively fight for him out of appreciation of Hachiman’s kindness and mental fortitude. 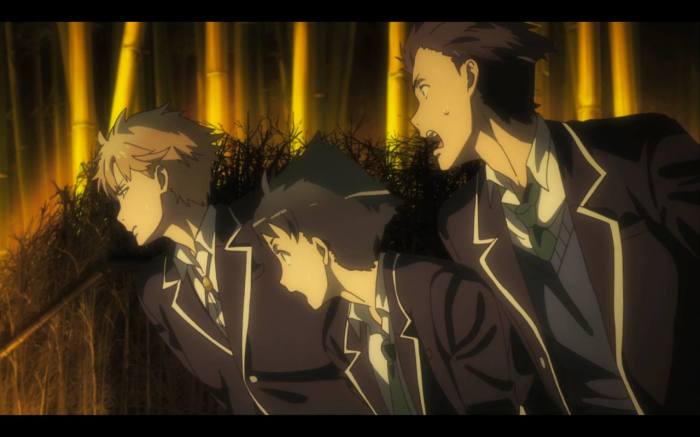 Real friends spy on you when you talk to girls and critique your moves behind your back.

Despite the name of the series, SNAFU departs from traditional teen romcoms by fearlessly dealing with dysfunction and confrontation. For example, following Hachiman’s false love confession, the girl to whom he confessed confides the extent of her own insecurities during the aftermath. However, many of these supporting conversations suffer from the saccharine calmness plaguing countless other animations wherein teenagers robotically rattle off a point-for-point list of reasons they understand and empathize with the main character. It’s an issue also prominent in the first season. Fortunately, the tempestuous personalities of Hachiman’s two unrequited love interests (Yui and newcomer Iroha) render them immune from active participation in these milksauce conversations.

But not from making the smoothest of moves in the history of high school romance.

The art and production quality of SNAFU continues to impress, but many Western viewers (especially the Yankees) will find the mint condition of Hachiman’s high school some sort of first-world fantasy. Education in the West is often far-removed from the heavenly confines of Sobu High School, where teachers actually have the time to help their students and dote on their interpersonal development. Visually, SNAFU is a bright show about students of a certain kind of affluence, which Hachiman himself realizes during a surreal student council meeting with a few corporate princelings. Although the series has a relatively forgettable new opening for the second season, the stellar original soundtrack from season one reappears to grant a spectacular score. 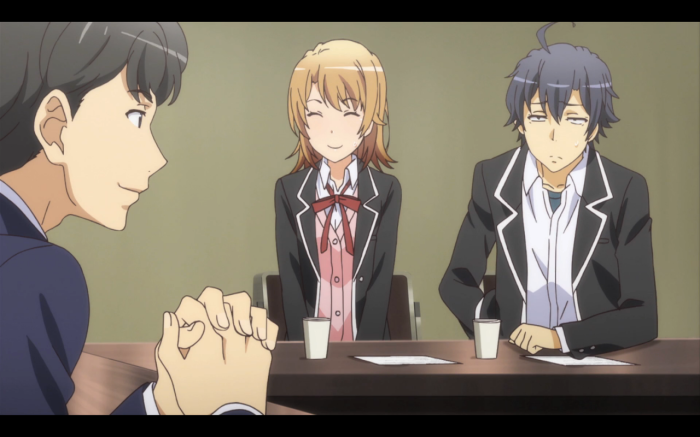 Corporation princelings teach us that it’s possible for our reptilian overlords to smile. And plan bangin’ Christmas parties.

SNAFU is missing some of the grittier problems that affect high school students, such as the widespread physical intimidation and emotional issues that plague any place where teenagers congregate. While those were not intended subjects of the series, they come to mind when the show attempts to deal with issues of group ostracism and non-violent forms of intimidation. While authentic issues do crop up and are dealt with, there’s little in the way of conveying any right-and-wrong judgements about the characters’ methodologies. We’re presented with issues and solutions, but all of the characters are fallible and the viewer isn’t bludgeoned with overt moralistic lessons. This intentional ambiguity serves to let viewers craft their own takes on the events and discuss their different opinions in complete civility. Or in flame-wars on the Internet. You know, either way.

LET ME AUDIT YOU AND REMOVE YOUR THETANS, MR. HACHIMAN.

Overall, SNAFU TOO is a continuation of the season one’s narrative with little deviation in the art and production quality. That’s a good thing considering the first season was lightning in a bottle compared to the abundance of horrible romcoms littering our viewing landscape. SNAFU distinguishes itself by reflecting reality in the ways it creates tension and avoids tidy resolutions. All of the characters are imperfect and become trapped in a web of teenage uncertainty and unfulfilled desires. The biggest selling point of the series is that it manages to accomplish all of these complex situations and themes with a natural fluidity that prevents you from feeling the weight of actions until their consequences are already upon you. It’s truly art imitating life and is definitely worth the watch.